Community Change Action is a national organization that builds power from the ground up. We believe that effective and enduring social movements must be led by those most impacted by injustice and voting is one essential lever of change.

All people and communities thrive as low-income people of color, immigrants, and women wield power to reshape our democracy and our economy to be just, equitable, and inclusive.

Our work centers the leadership of people directly affected by injustice:

Our (501c3) sister organization brings other tools and dimensions of power to our shared fight. Learn More. Explore how our country and Community Change have changed through our 50 year timeline.

To create the conditions for transformational structural change, the social justice movement must dramatically rebalance power in this country. Path to Power is our plan to do just that. Watch how we’re stepping into our vision for the future.

Community Change Action began to implement our strategic plan in 2018. It reorients our work toward a single overarching goal: by 2033, we will dramatically improve the material conditions for people struggling to make ends meet in the United States, particularly women and people of color. A crucial benchmark for us will be to enact a bold governing agenda at the federal level by 2025 on issues of economic and racial justice and immigrant rights.

Our strategy is to create the conditions for transformational change that moves us in the direction of justice, equity, and an inclusive democracy and economy. That vision requires:

Our sister organization, Community Change, was founded in 1968 by leaders of the civil rights, labor, and anti-poverty movements following the deaths of Dr. Martin Luther King, Jr., and Sen. Robert F. Kennedy, as a living legacy to the senator. Its founders’ vision and their charge—to build power through grassroots leadership, to challenge the government to be a force for good, to focus on poor people, especially poor people of color—are just as relevant today as they were then.

Throughout more than five decades, Community Change focused on strengthening the field of community organizing, pioneered new methods to bring grassroots leaders into civic life and community organizing into electoral politics, and launched national issue campaigns led by the grassroots. Community Change launched its advocacy arm in 2003 to add political power to our movement. We saw low civic participation as an obstacle to low-income people gaining political traction for the issues that mattered to them.

Community Change Action projects our values of justice, equity, and inclusion into the political debate—and into public policies adopted in Washington, D.C., and across the country.

By building and fusing together the power of organizing, ideas, and politics, Community Change Action and our communities have won significant anti-poverty victories including:

Since 2017, our communities' hard-fought gains have been under attack. We have: 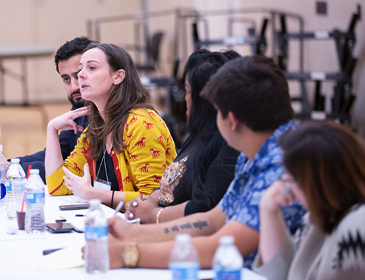 Community Change Action partners with community-based groups across the country to build power from the ground up. The magnitude of change we envision cannot be achieved without a robust set of partners capable of wielding power at the local, state, and national levels. We seek to build a movement that is bound together by common purpose and solidarity across race, gender, and immigration status.

We partner with and support community-based advocacy organizations, most of which are connected to sister organizations partnering with Community Change. We are committed to building permanent infrastructure and capacity for electoral organizing with our partners. Through technical assistance and strategic support, we strengthen our partners’ capacity for tactical and strategic innovation, organic leadership, narratives that work, and a deep and nuanced understanding of power as it actually operates in our current world.

Building and strengthening coalitions of grassroots groups — and uniting these coalitions to wield power — is a crucial component of our work:

The Black Freedom Collective (BFC) is a growing network of groups organizing Black communities and fighting to transform the historical racial and economic structures that prevent Black people from thriving. Across the differences in the BFC’s organizations, campaigns, and membership, its members are united in a demand for significant and long-term investment in Black communities. Read the “Toward Liberation” Strategy to find out more.

Coalitions of grassroots groups bring together our partners to strategize and share best practices on campaigns related to key issues of economic justice, such as expanding access to affordable and high-quality child care; expanding anti-poverty programs; and exploring new policies to support people struggling to make ends meet.