Bobby and the Center for Community Change 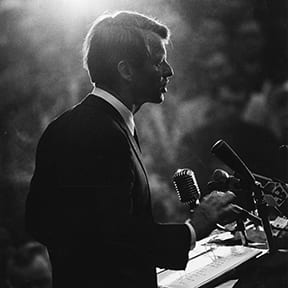 I still recall the moment that I truly entered the world.

It was not the instant when the bullets were fired. It was a few minutes later when I was awoken from my mother’s arms by the sound of a telephone ringing. On the other end, my grandmother merely told my mother, “Turn on the TV.”

The chaos at the Ambassador hotel that June 1968 evening seemed, in my 5 year-old perception, to be happening right there in our little house. Even 50 years later I recall images: Some people ran toward the tragedy, others away. A girl in a bright green polka dot dress sobbed uncontrollably. White campaign hats were everywhere. Hands covered faces and mouths. Tears swelled as people feared the worst.

In our own house, my mother gasped, “Oh, no. God, no” and began sobbing.

Years later, I would learn in an almost obsessive fashion about all the context. Bobby running for President to reclaim the mantle of another martyred American icon himself becomes martyr. The turbulence of ’68 – King murdered, Vietnam tearing America apart, riots, a crusade against poverty soon to be destroyed by Nixon’s and later Reagan’s deeply racist and anti-poor? politics.

The enduring metaphor of Bobby shot reaching for the hand of a 17 year old Mexican immigrant. It was that busboy, Juan Romero, who held Bobby’s head up from touching the cold floor.

But my recollection of that moment isn’t the classic macabre snapshot of Bobby on the floor – staring hopelessly beyond the onlookers – it is of my mother grieving. I don’t think of Bobby in the same way as JFK. John Kennedy represents the dim lore and majesty of a distant world. For me, 1968 is as far from 1963 as the latter is from 1865. Grainy images of the world before that night exist as mere prehistory. They represent the experiences of seemingly fictional people and events.

Bobby is real and personal.

That is all not merely to explain how one of the first things I remember happening to me happened to an entire country. Rather it is to disclose the personal connection that bonds the tragic events of a night 50 years ago to the here and now.  My social justice journey fittingly landed me a few years ago at the Center for Community Change, an organization founded as a living memorial to RFK.

The anniversary of Bobby’s death is an important marker in CCC’s 50th anniversary year – there are many obvious and some less obvious ways that CCC’s past and present are linked to a life extinguished 50 decades ago today. RFK went wherever the poverty was – whether it was the black neighborhoods of Bed–Stuy, white Appalachia or to stand with Cesar Chavez and farm workers in California.

So CCC is about going where there are people struggling and building power to take action together for justice. Like RFK, we deeply believe poverty in a land of such wealth and possibility is morally unacceptable. That was his word and it’s still a good one today. We also subscribe to his view that poverty is ultimately about power – that there can be no purely top-down solutions. Raising the voices and ultimately putting the most downtrodden at the forefront of decision making is not just part of the solution – it is the main thing to be done.  Finally, we know as he did that racism, sexism and bigotry against immigrants is foundational to the problem and so must be foundational to the solution.

But there are other more subtle ways I see Bobby around here. We are fierce, in-dominatable and tireless. Power does not yield without a fight – RFK knew that and we live that every day.

At a recent meeting when we were trying to reconcile how to describe the way to build grass roots power, someone pushed for “ruthless roots.” The word ruthless instantly took me back to Bobby. He was described that way by his enemies. The obsession to win and to be willing to roll up your sleeves and do “whatever it takes” that defined RFK is today too often missing from the left. The whole “rather be right than win” is an actual struggle for our side these days.

Even though like most of the country we love Michelle Obama around here – the famous line that brought down the 2016 Democratic convention, “When they go low, we go high” was met with groans by people in the trenches fighting the “low” tactics. The interests that try to keep struggling Americans, blacks, women or immigrants in their place do not yield to high minded reason alone. Have we not learned that from martyrs past—Bobby, Martin, John, Medgar, Emmett, James, Andrew and Michael, etc?

Though we all should be alarmed at the level of vitriol and diverseness in American politics, the answer cannot be some naïve form of compromise for the sake preserving decorum. People that want to keep you poor, deport you or throw you in jail can never be your friend. How many times did Obama have to learn the lesson that no, the people who hate you because you are black, or work for corporate interests want no form of compromise that we can live with. CCC and the immigrant rights movement has learned the same thing about Trump during the fight for Dreamers – we cannot compromise with white nationalists – we must defeat them. As Barry Goldwater never said: Ruthlessness in the pursuit of justice is no vice.

But Bobby was more than a warrior and CCC is fueled by more than ferocity – there is a level of compassion here that I haven’t seen elsewhere. It was always telling to me what came out in Bobby during and after the assassination of his brother John Kennedy. On the day of the funeral, he sent notes to all his children – the one to the eldest, Joe was simple and short, challenging him to “Remember all the things Jack started – be kind to others less fortunate than we.” At a Christmas party for orphans a month later, keeping a commitment to the legendary journalist Mary McGrory, a child not more than six or seven years old darted forward to declare, “Your brother’s dead! Your brother’s dead!” The little boy, knowing he had done something wrong, began to cry. Bobby picked him up and held him close for a moment and then said, “That’s all right. I have another brother.”

At CCC, we don’t formally list compassion on our job descriptions because it’s basically built in to our DNA as the essential element that holds us together. I see and feel us living, as team members and citizens, the very thing that RFK called for on another dark night of American history, the murder of Martin Luther King, “What the United States needs is not hate but is love, and wisdom, and compassion toward one another; and a feeling of justice toward those who still suffer within our country.”

Today, it’s popular for the left to speak of people being “woke.” My personal woke-ness is rooted in a terrible tragedy that we mark on this day. For CCC, woke-ness is nothing new – it is rooted in our birth, in our models of doing work – in our ways of being. In the end, the idea that we should find our own advancement in search for the advancement of all and that the future is ours to shape with our own hands is not always the popular view. Of this perspective, RFK once remarked, “There is pride in that, even arrogance, but there is also experience and truth. In any event, it is the only way we can live.”

Jeff Parcher is the director of communications for the Center for Community Change.