Fight for $15 Expands to Fight for Good Jobs 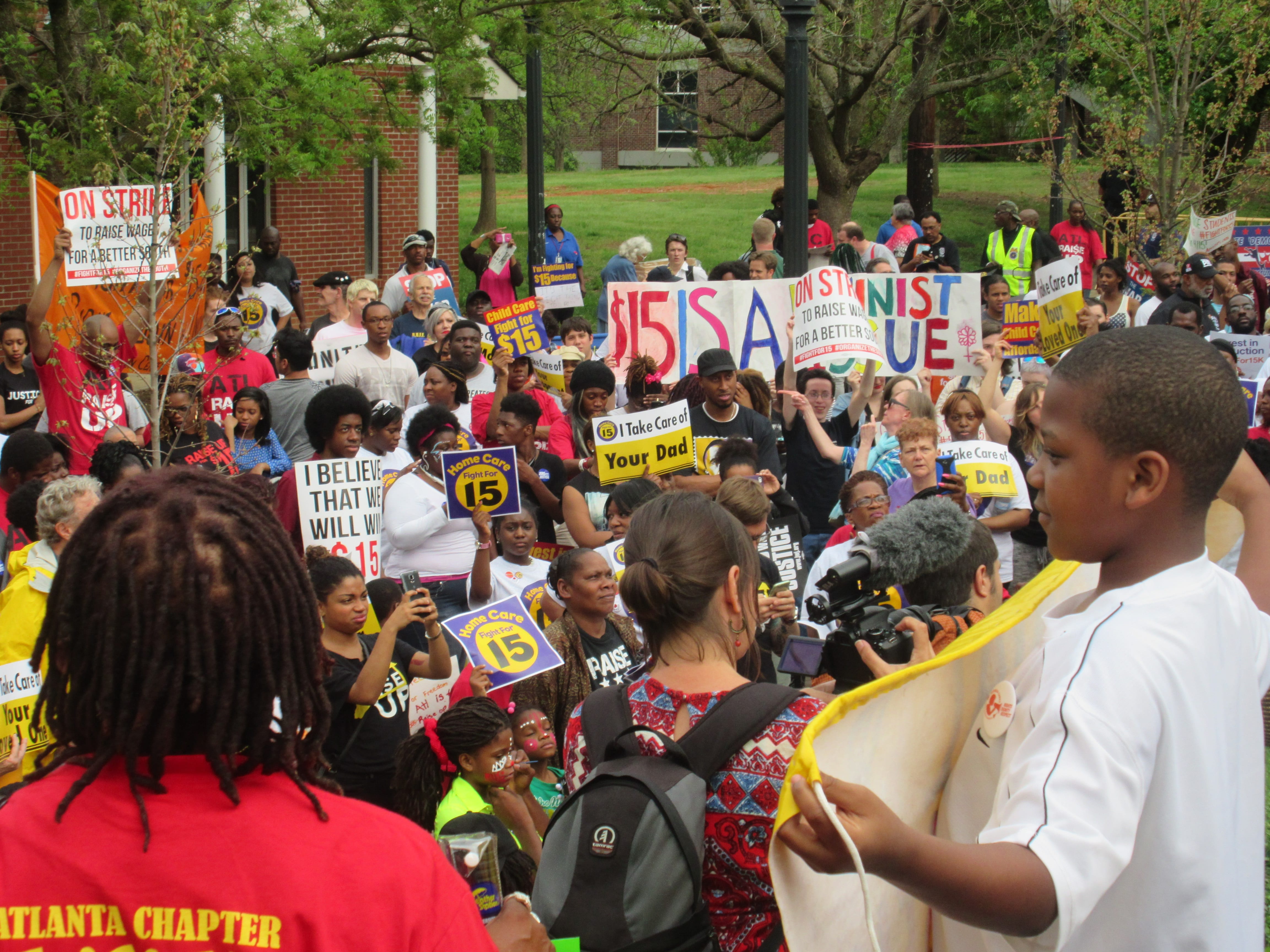 This piece originally appeared on TalkPoverty.org.

On Wednesday morning, holding a sign that read “Show me $15 and a union,” Letrice Donaldson marched with around 200 people under gray skies through East Memphis, Tennessee.

Letrice, 34, is an adjunct professor who is just a few weeks away from receiving her Ph.D. in history from the University of Memphis. She is paid $1500 to teach one class. Given the number of hours she puts in each week—teaching, lesson-planning, grading papers, and counseling students—she estimates that she makes approximately $5.36 an hour, well below the federal minimum wage. Letrice doesn’t get health insurance through her job and she has never received a raise.

“I get food stamps. I have $270,000 in student loan debt,” she said, explaining that her student debt is high because she was diagnosed with breast cancer while she was a student. Rather than dropping out and being forced to make payments without an income, Letrice took out more student loans to stay in school and continue teaching while undergoing chemotherapy. Letrice Donaldson, an adjunct instructor at the University of Memphis, earns only $1,500 per class that she teaches. Photo credit: Wendi C. Thomas

Letrice was among the thousands of people in 236 cities across the country that hit the streets to demand higher wages and better workplace treatment as part of the Fight for $15 national day of action. The movement has broadened—workers and their supporters are no longer fighting solely to increase the minimum wage. Lettice, for example, is paid per class not per hour—so an increased minimum wage wouldn’t affect her at all.   But she needs better pay and benefits like health insurance.

For Miguel Portillo, a car wash worker in Queens, New York, he joined the movement to fight back against workplace discrimination and wage theft.  Miguel is a part of the Car Wash Workers Campaign, an effort led by Make the Road New York and New York Communities for Change.  Organizing and joining a union has helped Miguel and his coworkers bargain for better wages and better working conditions.

“We’ve won a lot of things financial-wise, but the most important thing we’ve won is respect,” he said.

Still, with his hourly wage of $8.75 and his wife’s minimum wage job at a grocery store, they struggle to support their family.

Across the country in San Francisco, nearly 100 people flooded into a McDonalds at 6 a.m. on Wednesday, chanting, “Strike, strike! Organizing is our right!” Inside, people offered testimony about their struggles with low wages and unpredictable hours.

Isaiah Mitchelle of San Leandro, California works at Jack-In-the-Box for $9 an hour and is a member of a worker-led group called Up the Pay East Bay.

“It’s a backbreaker,” he said, describing his daily regimen of cooking, cleaning and cashiering. Isaiah Mitchelle, 19, poses for a photo amid early morning protests at a McDonalds in San Francisco. Isaiah works at Jack-In-the-Box for $9 an hour. Photo Credit: Mark Ortiz

Isaiah said life would improve drastically for him and his little sisters if he were to receive $15 an hour. “I could afford to save up for a car and help pay for my tuition at Chabot College, where I’m taking my general education [classes] right now.”

Maya Shankar, an undergraduate student at North Carolina State University, said that she joined the Fight for $15 when she started to think about her future.

“Once we get out of college, it’s going to be really, really hard to pay back the loans we took if we don’t have a good, stable job that we can pay it off with,” Maya said. She noted that a $15 hourly wage would nearly double her current pay at the campus library.

Maya was one of many students and faculty who came out Wednesday evening in the pouring rain to rally on the campus of Shaw University in Raleigh, North Carolina.

“I deserve $15 an hour,” said Sha-Love Lawrence, and in-home care provider in Atlanta. “And I need it to take care of my daughter and to make sure that she can live her dreams of becoming a doctor.”

Sha-Love was among a large crowd of protesters who converged on the campus of Clark Atlanta University on Wednesday. Many of the protesters were in-home care providers, holding signs such as, “I take care of your loved ones,” and “Home care workers: We take care of Atlanta.”

Miguel Portillo is a car wash worker who supports his family in the United States and relatives back home on an hourly wage of $8.75. Photo credit: Nathalie Alegre

Sha-Love explained simply, “We can’t live. We can’t survive on $7.25. That’s exactly what I make. That’s not livable wages.”

Providing in-home care is physically demanding and time consuming, Sha-Love said. She often works until 10 p.m., and if the next person doesn’t show up to take over her shift, she has to cover their shift as well.

Several organizations are now stepping forward to act on that message at a national level. On April 29th, the Center for Community Change, Working Families Organization,Jobs With Justice, Center for Popular Democracy, The Leadership Conference on Civil and Human Rights and dozens of local grassroots partners are coming together to launch Putting Families First: Good Jobs for All. It’s a major economic initiative to reinvest in low-income communities of color and bring jobs—good jobs—to everyone.

“I think it is important to fight together,” said Miguel. “If we don’t bring our fights, our campaigns, together, we are not going to accomplish anything. This fight is for everyone.”

Read more about the Putting Families First campaign at PutFamiliesFirst.org.