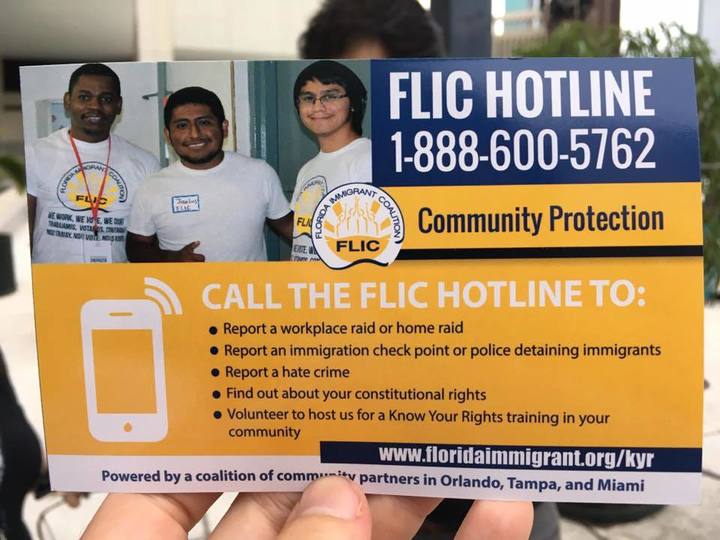 Since the election of Donald Trump to the presidency, the daily lives of undocumented immigrants in this country have become nerve wracking. The hateful rhetoric espoused by Trump during his campaign for presidency, which weaponized anti-immigrant sentiments as a tool to rile up nativist elements within the American electorate, has morphed into harsh anti-immigrant policies at the federal, state, and local level. These policies seek to criminalize our communities and tear apart hard-working families.

Here in Florida, we have unfortunately seen our own share of anti-immigrant efforts to crack down on immigrants. Miami-Dade County became the first municipality in the country to comply with Trump’s crackdown on sanctuary cities, with the mayor ordering jails to comply with federal immigration detention requests. During the Florida legislative session, lawmakers attempted to pass several anti-immigrant bills, including scrapping in-state college tuition for undocumented students and measures to enhance penalties for criminal offenses solely based on immigration status.

These threats are menacing our children and families. In order to protect families, the Florida Immigrant Coalition is establishing a twenty-four hour, seven day a week hotline for people to call for answers to their questions. Immigrants can call the hotline to report a workplace or home immigration raid, report an immigration checkpoint or police detainment of immigrants, report a hate crime, get information about their constitutional rights, and to get involved through volunteering opportunities.

The hotline allows us a vehicle to hear directly from the people most affected by these harmful policies, as well as document trends. The coalition can use the information to determine which geographies and demographics are disproportionately affected. The Florida Immigrant Coalition has dealt with cases of employers taking advantage of the current political climate to exploit workers, for example, by threatening them not to attend protests or face the possibility of being fired. The coalition has received complaints of teachers who have told immigrants students that they don’t belong in this country. Police misconduct has also been a recurring theme in the complaints received by the coalition.

Anti-immigrant policies also have the adverse effect of sowing distrust between law enforcement agencies and the public, causing dangerous or criminal incidents to go unreported by victims who are afraid of suffering adverse consequences by contacting authorities. Undocumented immigrants are especially vulnerable to abuse due to their lack of status and lack of economic opportunities. They often earn the lowest wages for the hardest work and have less access to sources of information, such as the internet.

Ultimately, the hotline seeks to connect our communities with resources and the broader movement for immigrant rights. Volunteers staff the hotline, offering a real person on the other line to help get people what they need.

The hotline is not limited to protecting immigrants, but also serves to connect permanent residents to citizenship naturalization clinics and access to college resources provided by the Florida Immigrant Coalition.

Thomas Kennedy is a writing fellow for the Center for Community Change.

The Fear of Injustice