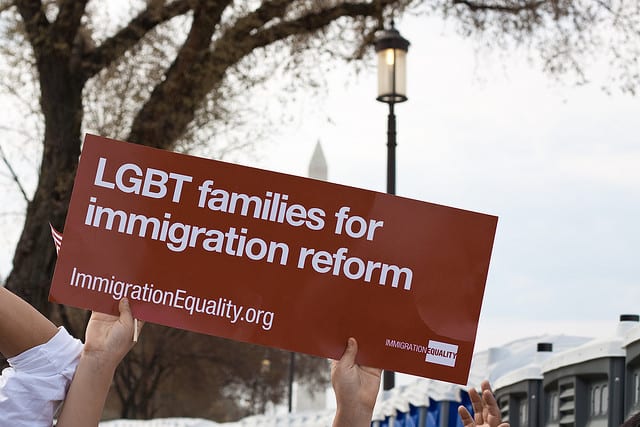 When two Portland women renewed their vows in Oregon, living as a mixed-status couple, the moment was impactful for more than one reason.  The couple renewed their vows to illustrate interconnectivity of the immigrant and LGBT rights movement. Deepak Bhargava, Executive director of the Center for Community Change, has been speaking about the similarities between these two movements for years. From discrimination to the limiting of rights, these groups have similar fights and motives for pushing their issues into the national debate.

Deepak recently spoke at the Lesbian and Gay Task Force conference where he revealed the fact that many of these groups have begun to work together. Taking a page from the civil rights movement of the 1960s these groups have successfully created a grassroots movement that has taken Washington by storm.

The Center for Community Change knows the power of movement building. It isn’t enough to have a few advocates pushing politicians. The community itself must stand up and organize. LGBT and immigration rights groups have been innovative in their tactics and tools; and their agility has produced results. The grassroots alliance between immigrant and LGBT groups will continue to grow and solidify as comprehensive immigration reform and LGBT issues come before politicians in 2013.

Comedy has become essential to survive the bizarre tenure of Trump’s presidency. Comics have riffed on everything from his tendency to misrepresent the truth to his widely unpopular immigration policy…

"Who am I? I am just a kid from the south side of Chicago. A weird, long-suffering Cubs fan, who grew up walking picket lines with my mother, who was a public school teacher."

Private prisons make more money the more people they keep incarcerated. In Florida, activists are working to stop the practice.

As Americans we believe deeply in freedom and fairness. We believe that we should be free to pursue the American dream, no matter your station in life or where you…

IN: Family UnityImmigrationKeeping Families Together

Toddlers crying after they are torn from their parents' arms. Mothers, sitting in chainmail cages, using foil blankets for warmth. A father who committed suicide after being separated from his…

What is your vision for the future? Families Call for Unity

[embed]https://youtu.be/Vwi-PRszVo0[/embed] Calling for an end to family detention, FIRM Action and CASA in Action united the voices of people from across the country in Washington, D.C. on Wednesday. What is…

The COVID-19 public health crisis has made it impossible to ignore the deep, structural flaws in the rules that govern our economy. Even as the pandemic has made our interdependence more apparent, we are forced to confront the stark differences in our abilities to weather the economic crisis caused by the pandemic. Although all of us participate in the creation of wealth in our society, a wealthy few capture most of these riches. The rest of us live one illness, one recession, or one piece of bad luck from economic ruin.