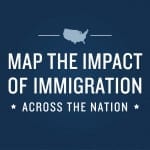 Today I stumbled across this interactive map, which charts the impact of immigrant students, workers and entrepreneurs in every American state.

The project, known as Map the Impact, is informative and engaging; it deploys relevant statistics and persuasive figures that underscore how much immigrant populations contribute to the economy on the state level. Here’s the (paraphrased) entry for Maryland as a good, local example:

On average, a foreign-born Master’s or PhD degree holder working in a STEM (science, technology, engineering and mathematics) field will create an additional 2.6 jobs in-state. As STEM careers move to play a greater role in the national economy, this figure is sure to rise. Additionally, immigrant-owned businesses in Maryland generate an annual income of $2.8 billion. If these entrepreneurs are provided secure pathways to citizenship, as the legislation currently under debate in the House promises, they will surely expand their role as job creators and business leaders. Thirdly, research predicts a massive shortage of registered nurses and medical professionals in Maryland by 2020. Immigrants are already filling these gaps: over a quarter of the state’s physicians graduated from foreign medical schools, almost entirely composed of immigrant students.

Perhaps these numbers aren’t mind-boggling; maybe the Maryland statistics don’t necessarily scream out for an overhaul of the immigration system. What they do indicate, however, is that immigrants are immensely important to the economy’s wellbeing. More and more reports prove—last month’s CBO findings are the prime example—that immigration reform is, in fact, a force multiplier for the national economy. Job creation, a shrinking deficit, more secure funding for Social Security: all these things can and will be accomplished if the House commits to passing the bill. The impact of an enlightened, reformed immigration system is clear in maps, charts and graphs. Now is the time to see it in writing.

Click here for more on the Map the Impact project.