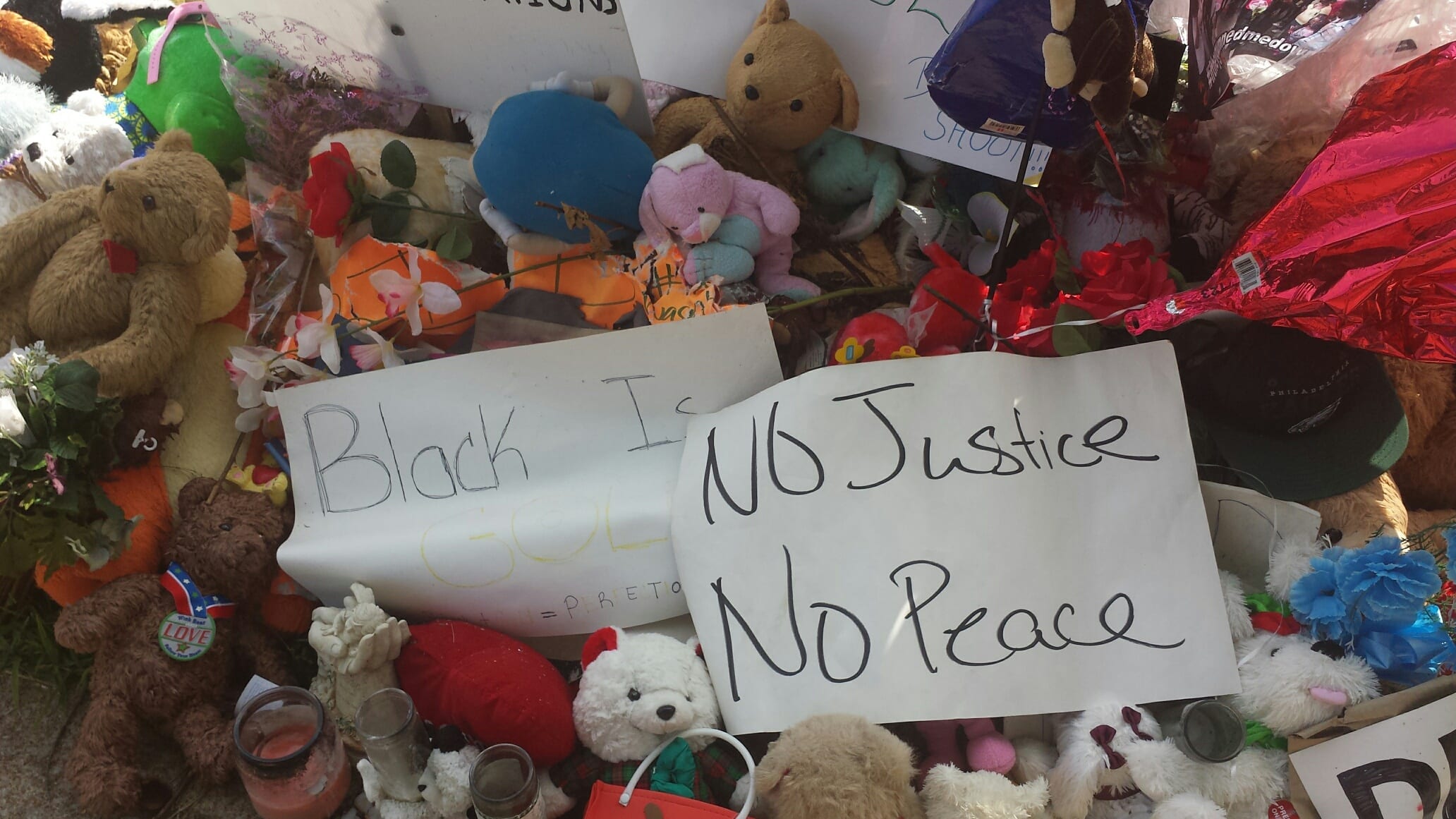 Field Organizer Tammy Thomas-Miles went to Ferguson, Missouri over the Labor Day weekend as part of a strategy session with other organizers. Here is Tammy’s first person account of the trip.

It took me 18 hours to get to Ferguson, Missouri from Florida in a van packed with young people and we did not know what to expect when we arrived. Two of the people on the van actually had brought gas masks, and it was unnerving to see so many police officers in the area. We arrived in time to attend a march through the community and there had to be nearly 2,000 people in attendance. Besides the march and rally there was canvassing being done in the neighborhood of Robert McCulloch, Ferguson’s local prosecutor, to create awareness of the petition for a special prosecutor to take the case. All the actions were geared toward justice. Justice for Black lives lost, justice for Michael Brown, justice for the community’s demands to be met to address the ongoing systemic problems of police practices in Black, Brown and all oppressed communities that are listed at http://www.handsupunited.org/

The second day was filled with faith and healing services, planning and strategy sessions, a panel discussion by folks working on the ground, a visit to the memorial site, and conversations with a few of the residents in the area.   I felt sick to my stomach as I walked near the memorial site.  It looked as though the street was still stained by Michael Brown’s blood.  People from the neighborhood were out patrolling, protecting their community and sharing their experiences.  A resident shared with me that he was glad to see so many people supporting this.  He told me that Black people in the area had lived under these conditions for so long he was afraid that many of them had just accepted it.  Another resident said that it was her duty to be out there fighting for her children and her community.  She kept telling me “enough is enough.”

I have never participated in a space like the one that was created by the Black Lives Matters Ride (BLM).  About 300 Black organizers, lawyers, videographers and healers converged on St. Johns United Church of Christ.   It somewhat resembled an organizing utopia for people of color.  I wondered if this space was similar to what Ella Baker, Fannie Lou Hamer and Septima Clark felt or experienced not so long ago.  It was a space that cultivated sharing, learning, healing, wellness, oneness along with strategic planning.  This was a space that was just as much about Ferguson as it was about anywhere in America where Black and Brown people are being brutalized by the police, subjected to oppression, feeling the wave of systemic racism.  A place where Black people were “sick n tired of being sick in tired,” ready and willing to put their live on the line for change.

During the panel people spoke with such passion and pain.  One person shared that they were “feeling continued rage” but stated that it is most important to learn how to best channel the energy that comes with rage.  How do we use it to build power?  How do we use it to fight racism?  A few young women shared their experiences of being on the front line.  It allowed for a very robust conversation about the need for women who are doing this work to be validated, protected and lifted up.

My trip stirred up all kinds of deep stuff for me.  Racism in America is STILL REAL.  Many of us work so hard for social justice yet often have limited to ability to make a change that deeply affects our own families.  Sometimes there just isn’t funding for the work we most desire to do or it’s just not the “hot sexy” issue at the time.  As we do our work and push for social change, we should at every turn be cognitive of race and culture.  Racial justice should be embedded in all of our campaigns. Just as it is important for us to organize leaders who are impacted by the issue, it is equally as important for us to nurture organizations of color who are on the ground, closest to the people who are impacted by the issues.  If we want to make a serious change in communities like Ferguson, we should seriously think about what and how we are willing to invest. Funders should be willing to put money into these communities in ways that are more creative and outside of the box.  They should be funding organizations led by people of color who are working in communities of color. Organizers should put real energy toward creating real capacity, infrastructure and sustainability in Black and Brown led organizations.  How do we generate economic security for all people and not corporations?  Can we deliver popular/political education in a way that it creates a sense of urgency for oppressed people to vote in every election?   Can we gain control of our governmental offices and create policies that work for “everyday” people?   If this can be figured out in Ferguson, we can create a model that will create real change for people living in Fergusons all over this country.