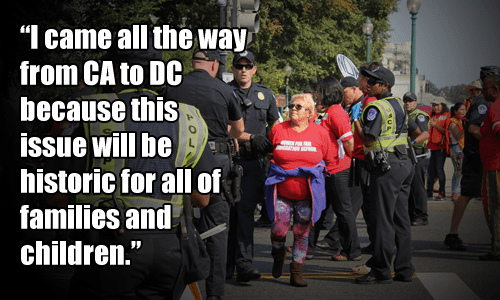 This blog is courtesy of our friends at Reform Immigration for America.

Look what you did last month. What are you going to do about it now?
‘

What a difference a month makes! Since August 1st, from coast to coast, grassroots groups organized more than one thousand actions, and the energy and pressure of our activism produced real results: 25 key Republican Congressmen have made public statements in support of immigration reform.

This is what we were able to accomplish together.

In Florida, the Orlando Sentinel reported that Rep. Daniel Webster “did something he’s avoided for months,” and declared his support for an approach to immigration reform that includes a path to citizenship.

In Colorado, hundreds of activists attended a march in Greeley, uniting with small business owners to call on Congress to act and pass reform.

California groups organized the “Caravan for Citizenship” that mobilized thousands of immigration reform supporters across the state to Rep. Kevin McCarthy’s district office.

In Utah, Rep. Jason Chaffetz acknowledged the need for a pathway, saying that, “there has to be a legal lawful way to go through this process that works, and right now it doesn’t.” In Illinois, immigrant rights activists made progress at a town hall event with Rep. Aaron Schock when he said that he is open to a path to citizenship.

In Alabama, when community leaders and families shared their stories with Rep. Spencer Bachus, he responded saying, “because I don’t think we ought to have two classes of long-term residents, I support a pathway to citizenship.”

And in Ohio, activists hand-delivered your signature along with those of 600,000 other activists to Speaker John Boehner’s district office calling for action on immigration reform and the path to citizenship.

Congress is about to return to session, and we must make sure that our representatives are ready to show real leadership and bring comprehensive immigration reform to a vote.

Let’s keep up the momentum from all of the amazing work during August recess. Call your representative now at 888-787-9658 to demand a vote on the path to citizenship.