Kwanzaa is the perfect holiday for activism 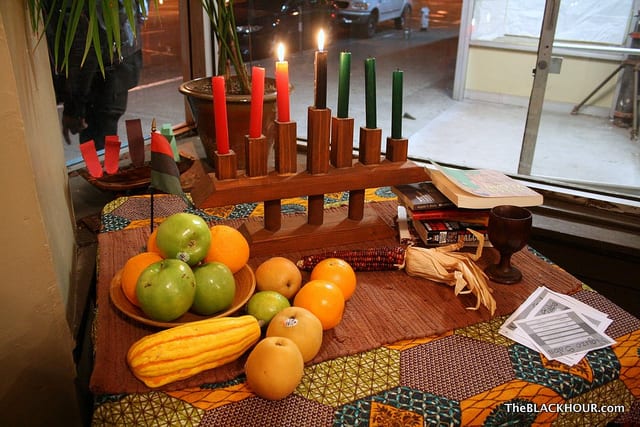 When I think of the holidays, I think of mistletoe and tinsel, Nativity scenes and presents under the tree.

But this year, visions of sugarplums have been replaced by the ugly reality of police brutality and an economy that generates record profits for corporations but makes it hard for workers to get ahead.

Today’s surge of activism interrupted the rhythm of our holiday rituals, which for many have long since devolved into a frenzied pursuit of material things.

Instead of scouring the mall for the hottest video game or this year’s must-have toy, people seem both introspective and ready for action.

Sure, die-ins and organizing by fast food workers may not fit our traditional image of the holidays, but if you understand the principles of Kwanzaa and believe in justice, the timing is perfect.

For those who aren’t familiar with the African-American holiday Kwanzaa, it’s a weeklong celebration that begins Dec. 26.

Dr. Maulana Karenga created the holiday the year after the 1965 Watts riots, which were sparked by the police beating of an unarmed black man. The unrest that followed led to 34 deaths, 4,000 arrests and $40 million worth of property destroyed.

In attempt to defuse the tensions, Dr. Martin Luther King went to Los Angeles and according to news reports, denounced the violence but reminded critics that the unrest was sparked by reasons that were “environmental and not racial.”

“The economic deprivation, social isolation, inadequate housing, and general despair of thousands of Negroes teeming in Northern and Western ghettos are the ready seeds which give birth to tragic expressions of violence,’’ King said.

The creation of Kwanzaa acknowledges the need for a collective response to the political unrest of the time and gave principles by which to rebuild community and support community activism. The seven principles are: Umoja (unity); Kujichagulia (self-determination); Ujima (collective work and responsibility); Ujamaa (cooperative economics); Nia (purpose); Kuumba (creativity); Imani (faith).

All of the principles are relevant to today’s activism, but two stand out the most – self-determination and collective work-responsibility.

Isn’t that what we’re hearing at the protests and pickets?

On Saturday, one of the last shopping days before Christmas, thousands of #BlackLivesMatter protesters flooded the Mall of America, drawing the public’s attention to the value of life. According to news reports, some chanted, “While you’re on your shopping spree, black people cannot breathe.”

I think it’s interesting that to persuade people of the value of black life, protestors had to interrupt shoppers as they labored to acquire more things.

You can see this tension between the worth of people and the worth of property in the police response to protests following the killing of Michael Brown in Ferguson, Missouri. Was the National Guard called out to protect citizens or to protect businesses and stores – property – from being damaged?

If our military forces and law enforcement are increasingly deployed to shield storefronts and the profits they generate for a few, who remains to protect life for the rest of us?

That’s where the third day’s principle comes in. According to the Kwanzaa website, collective work and responsibility is “to build and maintain our community together and make our brother’s and sister’s problems our problems and to solve them together.”

Isn’t that exactly what we’re seeing when fast food workers and healthcare workers band together to demand set scheduling and wages that allow them to save for their retirement and care for their families?

Isn’t this commitment to be our brothers’ keeper visible in the push to end hyper-policing in black and brown communities and mass incarceration?

Whether they know it or not, activists against police brutality and labor organizers are living the spirit of Kwanzaa in every rally, march, tweet and Facebook post.

It’s unfortunate that it took a rapid succession of deaths of unarmed black men at the hands of the police and staggering income inequality to prod us into action.

But for those of us who believe in justice, regardless of whether you observe Kwanzaa, this moment is a gift.

Wendi C. Thomas is an award-winning journalist from Memphis, Tennessee, who focuses on social justice issues.